Last month, the leading cryptocurrency tried to break the high resistance level between $38K and $40K in vain, but the light at the end of the tunnel was ultimately witnessed.

Nevertheless, Bitcoin needs to break through $44,500 so that the current range can be shattered, which will be instrumental in driving the price to the $48K area.

“Breaking $44.5K could send $BTC to $48.9K, which would be a stiff resistance barrier for BTC to slice through.”

Martinez had previously opined that $48,000 was a high resistance zone, given that approximately 4.71 million addresses hold 2.58 million BTC in this area.

On the other hand, upon reaching the $48K level and breaking it, Bitcoin will be eyeing the $60,000 level based on the formation of an inverse head and shoulder pattern.

“Bitcoin [is] forming a potential inverse head and shoulders pattern with a price target over 60k. Valid on the break of the orange line, which is just beyond the key area of resistance.” 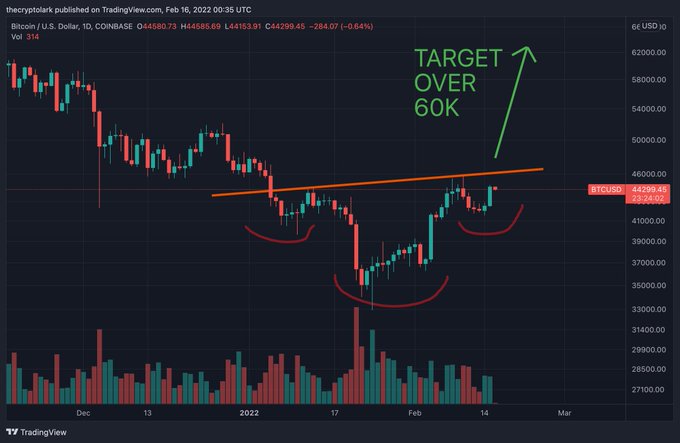 An inverse head and shoulder pattern is a bullish reversal structure that shows the preceding price action and trend was bearish.

On-chain analyst Matthew Hyland had previously stated that Bitcoin had to break the $44.5K area to create a higher high, which characterizes an uptrend.

Therefore, $44,500 is the current price indicator to watch because it will determine how Bitcoin plays out going forward. The leading cryptocurrency was hovering around $43,825 during intraday trading, according to CoinMarketCap.